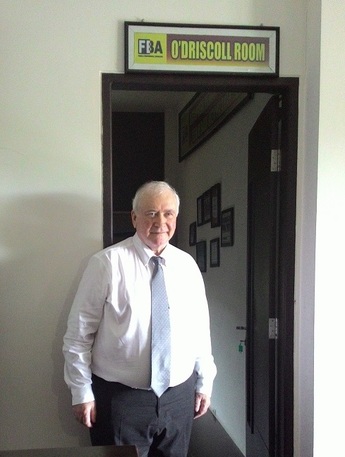 ​It is said that time heals pain, but there is no doubt that the terrible events of December 2004 will never be forgotten in Asia, but in particular in Banda Aceh, the scene of most devastation and loss of human life! However, out of darkness comes light and so from those terrible events came a helping hand from people right across the world. In particular, the establishment of FBA by Azwar and his team of young and principled volunteers, became a beacon of hope for those who had lost all.

Similarly, FBA, representing as it did, the very best of the non-governmental volunteer movement, offered a vehicle to those of us in Ireland who wished to help. We needed an option that would be quick, efficient, effective and direct. Edel Currie from Dublin Port Company,  had escaped  from the tsunami in Thailand and wanted to help those in need.

I had the good fortune to know my good friends Azwar and Kendartanti and between us we came up with the idea of re-building a school, SD 101. The work commenced in May of 2005 and the completed and furnished school was handed back to the authorities and to the community in November of the same year. This was a remarkable achievement by any standard, especially given the transportation, manpower and supply challenges that existed in Aceh at the time.
SD 101 was the first school to be rebuilt in Aceh after the tsunami. This would not have been possible without the drive and inspirational work of FBA and the generous support of Dublin Port Company' staff and board. The project also inspired the local port community in Dublin. Guided by Charlie Murphy, the schools and communities in the port area contributed to the relief effort. The support of the former port Chief Executive Enda Connellan and Chairman Joe Burke together with the employees of the DPC made it all possible. The late lamented Mayor of Banda Aceh Mawardi Nurdin and his colleagues were a rock of support. Others in Ireland were also inspired by Aceh's trauma.

Joe Woods, an accountant from Balbriggan raised 25,000 euro so as to provide a water purification plant for the school and the village.

I spoke with a friend, Anne McCrudden, before I came to Banda Aceh. Anne recalled how her mother, Angela McNamara, then a 75 year old lady, stood in the cold in Ireland and collected 22,000 Euro from ordinary Irish people for the victims of the tsunami.

In these dark days of acts war and terrorism, that deliberately causes hardship and loss of human life, we should remember, that trait of co-operation and understanding which brings out the very best in us as human beings.

Let us celebrate how people of different races, nationalities, political affiliations and religions set aside their differences in the face of the great disaster of 2004, and worked together, hand in hand across the world, in the interest of their fellow men women and children. 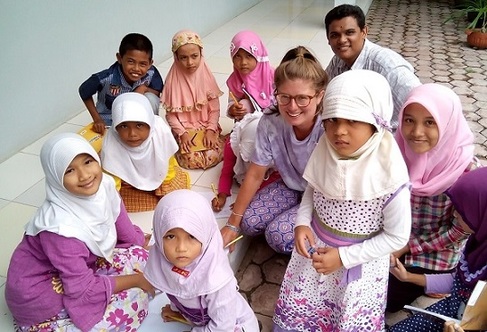 ​In the final days of Ramadan, Banda Aceh’s FBA (Forum Bangun Aceh) held a three day workshop for children from the surrounding area centred on a three pillared policy of Religion, English and Creativity, all with an environmental focus. Environmental damage and waste disposal in particular is something that plagues Indonesia with beautiful rice paddy landscapes being ruined by piles of rubbish and people carelessly chucking plastic out of car windows. The drive to learn English is felt everywhere as it is seen a means to communicate and compete in this ever globalising world. It is not an easy language to grasp and those that can speak it, do with pride and confidence. It is an encouraging sight. Islam is foundational and crucial to Acehnese society with schools providing what is generally understood as an Islamic education. There are numerous after-school clubs and informal groups that help children recite and understand the sacred texts. In these ways, what FBA provides is the perfect selection of activities to suit Acehnese society’s needs – particularly parents’ needs in the holiday month of Ramadan!

In the meeting running up to the workshop innovative ideas of how to make the programme creative were discussed and the children each had to make a paper hand to raise in the air to be recognised, thus combining recycling and learning. The children had three mornings of tuition and I as an English speaker ‘helped’ with the language class. I feel I was more of a distraction, or motivator, depending on your point on view. The children ran through the standard topics of animals, food, identity – a lot of ground was covered in the hour. Games were played to mix up the rote-learning and because it was cooler that morning the children were sent outside to list all the things they could see, in English. Having the children play outside whilst completing the task reflected FBA’s holistic and pioneering approach to education in Aceh. It  slowly infused environmental awareness into the programme, ‘made English fun’ and got the children running around mid-lesson, burning off some excess energy and prepared them to focus in the final section. Improvements could be made into the set-up of the class; dividing boys and girls into opposing teams and have them in competition with each other simply fuelled the stereotypes of domineering males and docile, quiet females. Behaviour such as cheating was quietly ignored thus validating it as an appropriate form of success. It was decided that the winner of the competition was not to be announced and the focus was to be on what they had learnt that day and cooperating with each other. Despite these easily rectifiable teething problems the English lesson was enlightening and a good start to the programme.

The Creativity exercise was an unmitigated success and all the previous mishaps were corrected. The children worked in mixed groups with one volunteer per group. Boys and girls worked together and actively helped each other out to create the items. The exercises involved using a used water bottle as a growing station for plants and covering it in off-cuts from fabric stores as decoration. On the second and third day the children made a pencil holder from sheets of used paper. This reinforced the ‘green’ slant to the programme as it explicitly showed how to re-use everyday household items. The atmosphere was calm but focussed and fun as the rain beat down outside and everyone (even the boys!) carefully and methodically decorated their items. The focus on teamwork really shone through here as the children helped each other cut, stick and roll various accessories to create the plant pot and pen holder. This for me, was the highlight of the day. Not only did it help instil cooperation between the children as they could not make the things with one pair of hands, but it was also creative; they had to find material that they liked and fit it to their bottle, cut the paper to right length, stick them in the correct place whilst creating something that was aesthetically pleasing and functional.

Although I was not in attendance during the religious lesson, the reports were positive and there was room for improvement.  Overall, the three day programme can be seen as a solid springboard for things to come from FBA. Its forward thinking approach to education is refreshing and relieving and provides a space in which irreplaceable values such as cooperation, creativity and environmental awareness are taught in an engaging way. Hopefully this three-pillared approach will continue throughout the year in different formats and each time things can be altered and improved so that the teachers, volunteers and children can keep learning and transforming.